Extract Introduce 4 key services that can help to automate deployment processes and help to release your code in different stages. The Services can be used as stand-alone services as well as combined-integrated to configure-setup CI/CD for your Infrastructure.

These services help Developers to create pipelines of newly committed code and can then directly deploy it to their respective Instances without ever manually entering into the Servers.

Lets get introduced to all the respective services one by one and also get to know there significance and importance.

CodeCommit is a highly scalable, managed git based private repository maintaining Service. Basically it is an AWS branded version of Git with other features that can help you to make this service interact with other Services. CodeCommit is usable the same way you use GitHub for storing your Code with multiple branches and multiple commit timelines.

CodePipeline is a continuous delivery service that automates the building, testing and deployment of your software into production. CodePipeline can be configured to be triggered when there is a new commit in CodeCommit and then It will fully automate your release process from end to end, starting from taking your source repository through build, test and deployment stage. You can also prevent changes from moving through a pipeline by including a manual approval action in any stage except a Source stage.

CodeDeploy is the service that deploys the code from CodeCommit after CodePipeline is triggered and the build has been created by CodeBuild. CodeDeploy can deploy your code on ec2 instance, s3 bucket, as well as inside Lambda functions. You can also opt-in for various types of Deployments specifically for ec2, ecs and lambda like.

In the above shown Image we have depicted a sample procedure of how a CI/CD may work on AWS. 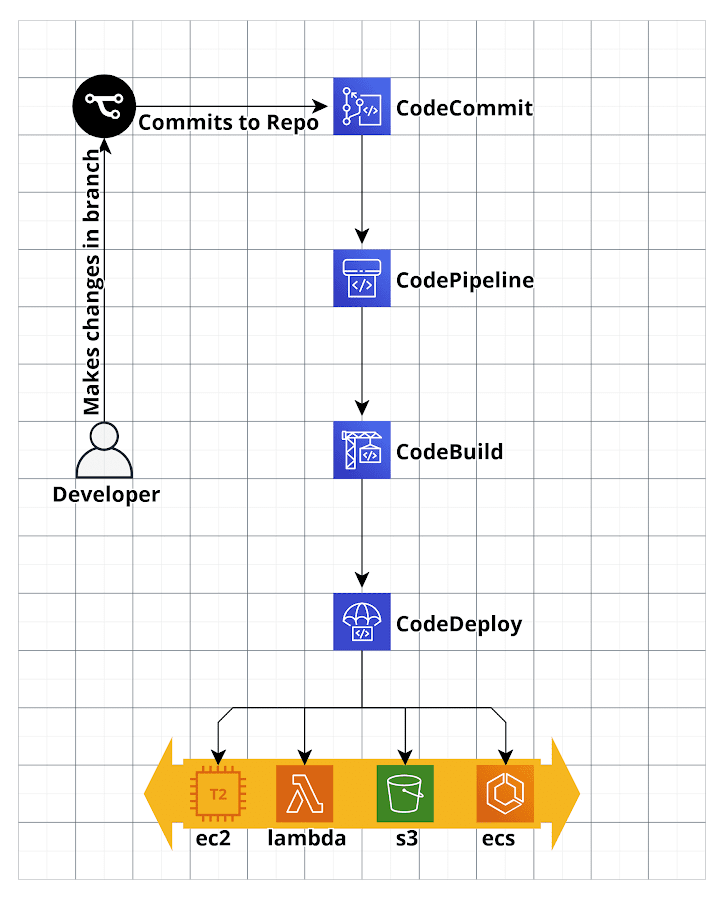 Again, this example is not comprehensive and can be tweaked by any user according to his/her personal requirements; like you can use Github as well as s3 Bucket instead of CodeCommit from where CodePipeline will monitor and initiate Processes on updates/changes in the existing code.

Conclusion CodeCommit, CodePipeline, CodeBuild and CodeDeploy services have been launched keeping in mind the pain points of Developers that they have experienced in establishing CI/CD and AWS has also made the services very much flexible and compatible with other Third-Party Repository Maintainers.